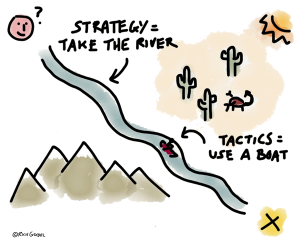 When I started my MBA, one of the goals was to move from a Tactical thinker to a Strategic thinker.  The career coach they assigned me surprised me by pointing out that all my assessments said I already was.  I thrived in the three strategy courses that Georgia State University had in the curriculum for our Executive MBA class and began to see what he was saying.  I had moved into the strategic realm for a few years by that point without realizing it.  But how do you explain to an interviewer that you are strategic?  Perhaps with stories? 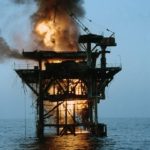 I think the best example is one of my “Bet the company” or “burning platform” stories from a while back.  The software house I was working for at the time, managing a branch office, had a single product.  A vertical software suite for managing fleet and facility logistics and maintenance.  It sat on top of a dying (burning) platform called SPEED II on WANG hardware – has anyone heard of these anymore?  Dead.  In the death throws of this platform, the company could no longer sell its only product line.  It had to migrate, and fast.  The president of the company flew up to my branch and asked me to lead the project to re-platform their application suite onto a new technology.  One that was completely incompatible with their existing platform.  Sales had dropped 90% and they needed a new platform NOW.  So I came down to lead that project.  Still tactical, right?  Yep.

It was a massively complex project and I had about a quarter (in the end a third) of the company working for me on it.  We had to figure out what the dying platform was giving us that the new platform currently could not, how to build those features, then how to automatically convert the very large code base into that new platform.  This is the product that became Xponent – a case tool now in use in 56 countries.  But wait, the goal was just to re-platform the vertical application…

Along the way of building this new platform, I saw how we could make this a marketable tool that would save other software vendors in the same situation.  Our tool could either become an in-house proprietary tool for building the flagship vertical product, or it could become a product in its own right and provide an entirely new revenue stream for the company.  But in doing so, would we enable our competition to beat us at our own game?  I looked at that and decided, no that would not happen.  None of the other software houses played in our company’s market or had the deep expertise to establish a solid enough reputation to sell it once built.  So the company went from one dying product to two marketable products – one slightly crippled as it took time to evolve to the new platform, and a vibrant one with a small but hungry market – and completed first commercial ship of both products in 9 months.  That, to me, smells like Strategy.  And this was a decade before my coach made his “odd” comment.

This sounds like bragging, but the company would not exist today if I had not succeeded in both products.  I do not mean to imply that I am the only one who could have saved the company, it was full of bright people or they could have gone outside.  But the success of my project did save the company.