I have been branding myself with the tag line “Driving Business Strategy with IT Strategy,” so it seems that I should talk about how IT strategy can drive or enhance the overall business strategy.  My previous post on strategy talked about creating a new product line that the company could sell, and thereby generating an entirely new market.  Although we were building it anyway, it became a new capability driven by IT that changed the overall strategy of the business. 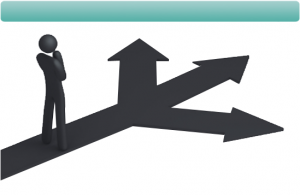 In this post, I want to talk about a somewhat different situation.  A mature and solid, large company that I will not name lest their Reputation Bots swarm me, makes hardware and software components for the Freight Rail industry.  Among the reasons I was hired there was my deep knowledge of Positive Train Control (PTC), a critical project in that industry.  This company did not make PTC components, but did make the locomotives on which they were installed, and many components in the locomotive network interacting with it.  Not only did they not make PTC components, they had made the affirmative decision  to avoid offering those components.

In the course of my other duties, I just happened to learn that a key technology foundation of PTC was being deprecated by the vendor in around a year.  This naturally caused a rather large concern within the Freight Rail industry as it was the backbone of the necessary interoperable communications.  Other vendors to the industry provided the components that used this technology, and they suffered from a terrible reputation for quality and service – two of the strengths of the company I worked for.

The company had avoided this market originally because they did not have the in-house expertise to develop the necessary cards and software – a lack they had remedied over the years – and because they did not want to assume the safety liability – imagine two trains colliding because of a bug in this software and killing dozens of people.  Current vendors in this space were protected from that liability by simply being too small to pay any judgment, so they would go bankrupt.  This company had deep enough pockets to need to pay out any liability judgment.  They were, however, familiar with this level of liability as their engines keep passenger airlines in the air.  The real question was: Would the market generate enough revenue to be worth the liability risk?  I took on the task of finding out.

I will not reveal details, but the total market was over 9 figures in 3 years.  That was enough to justify the liability.  The technical hurdle had been solved over the past 4 years.  It would be a very hard project, but the payoff was there.

As I was building the business case, the original vendor of the backbone technology decided not to revive the product, but to extend the maintenance of it another 3 years.  This did not remove the problem, but it made it less urgent.  When I presented my findings and plan, my company decided to use this development as a reason not to pursue the new product line.

Now, let me set the ambient environment.  They had staffed up based on a projection of 20% or more revenue growth per year for at least 4 years.  Instead, they had just lived through a 20% down year and current revenues were indicating yet another 20% decline.  A 9-figure new product line would have erased all that.

IT had developed a new capability that could generate a previously untapped revenue stream in a critical time when they needed it – IT Strategy driving Business Strategy.  Unfortunately, those in charge of the Business Strategy could not see it.  End result?  Significant layoffs making news.  Their competitors may not be so short sighted.

If you are from the company I carefully avoided mentioning, please do not sue me.  Like those other vendors, I have no way to pay a judgment – and these statements are simply my personal opinion and reflect the official position or opinion of no one else on earth.